The St George Community Network has the opportunity to influence how CIL funds are spent in St George, with the four St George Councillors making the final decisions as part of the Area Committees. 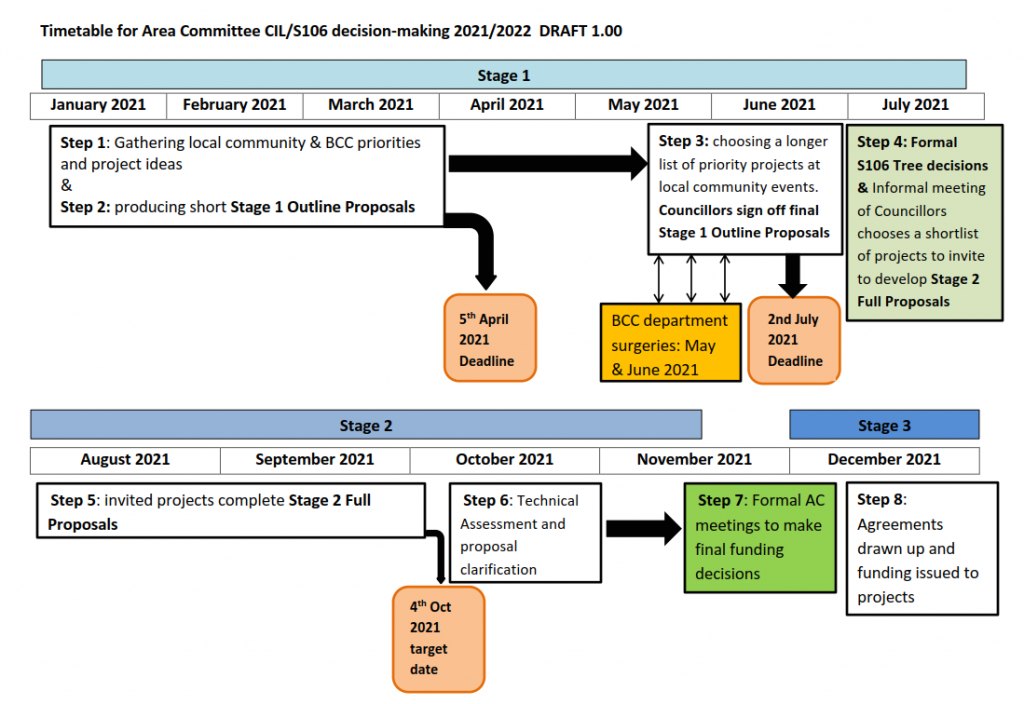 The chart above shows the outline process for 2021.

Initial ideas need to be prioritised by the community by the end of March, so that more details can be developed with the Area Committees making final descisions in September.

Watch the 2021 information video on the CIL/S106 process

What is the decision making process?

Public meetings were held in February & April 2019 to discuss projects to be prioritised for CIL & S106 funding in 2019.

Following these meetings Councillors met in May 2019 to decide which projects across the Area 4 Committee area would be progress to the more detailes stage 2 assessment.

At the formal Area Committee on 3rd October 2019, it was agreed that the following projects would be funded (CIL funding unless noted):

More details of some of these projects can be seen via the link below.

SGCN held community meetings on 14th March & 20th June 2018 & 15th August to talk about the options and the spending of CIL funds available to the St George area – and the projects on which the available funds could be spent.

The Area Committee then met on 13th Sept 2018 – Meeting Papers

Funding was allocated to two projects in St George
– Provision of publicly accessible toilets in St George Park in existing buildings for 2019 (to remain until any new café /community building is in place).
– Troopers Hill Field paths & access track (with match funding sought by Friends of Troopers Hill)

The key outcomes of the discussions at the community meetings were: