One of the aims of the St George Community Network is for us to work together influence plans for the area.

The Network works to influence decisions through its Topic Groups and its Network meetings.

The SGCN hold community meetings to talk about the options and the spending of funds available to the St George area from past developments – Community Infrastructure Levy or CIL – and the projects on which the available funds could be spent. The final decision on spending these funds is taken by Councillors each year through the Area Committees.

More information about CIL and the decision-making process >>

Listed below are the projects that have been suggested and / or funded for St George.

We are holding a series of meetings for local community groups and residents to discuss priorities for allocating Community Infrastructure Levy to projects in St George in 2021.

These meetings pick up on conversations that started at a meeting in February 2020 but were interrupted by the pandemic.

Full list of ideas suggested at the meeting in February 2020 >>

Below is more detail about some of these projects with updates from the 2021 discussions.

Work was carried out in the summer of 2016 to replace the safety surfacing and rebuild part of the ‘Dragon head’ in the play area, however, the wooden structure will need to be completely replaced within the next two or three years giving an opportunity for the whole play area to be redesigned.

It has also been suggested that some outdoor fitness equipment should be added in the park, this could be done as part of the same project.

The collection of buildings in the centre of the park include the bowling club pavilion, the café kiosk and the park keepers hut.

It has often been suggested that better use could be made of these buildings or that some of them could be replaced. Ideas include creating a new café / community building with indoor seating areas and toilets – this would be a long-term project needing at least 5 years to design, get planning permission, raise funds and build.

One of the existing buildings was converted into a public toilet during 2019, using CIL money allocated in 2018 (see above).

At the meeting in January 2021 it was suggested that a priority for any changes of use for these buildings and for the disused bowling green should be for the provision of improved youth services.

Around £100k is required for repairs to current facilities to keep the wheels park as is. In the February 2020 meeting we saw a presentation asking for funding for a much larger scale project to bring more improvements. In part this was to take advantage of the boost to the sport from skateboarding being included in the Olympic Games for the first time.

In addition to the three projects above which are seeking funding, funding to improve the Lake at St George Park for wildlife was allocated in 2019

With four major potential projects and links to the adjacent St George Library and St George Community Centre, there is a need for all these projects to be considered together and produce an overall plan for the park.

As part of an overall project new paths could be incorporated on existig desire lines and other ideas such as improved entrances and the introduction of drinking fountains could also be considered. When first established St George Park was blessed with a magnificent drinking fountain.. 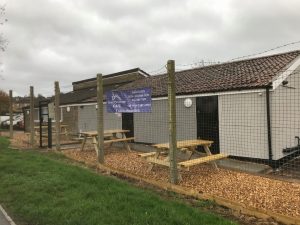 A lot of great work has been done to the pavilion in Dundridge Park by St Nicholas Wonderers Football Club over the past year or so.

When Covid restrictions allow, they now run Dundridge Farm Café and have improved toilet facilities in a new outside block.

The club with the support of the Friends of Dundridge Park would like to extend and improve the buildings further to allow it to be able to host more community events and activities. They would also like to create some allotments in the adjacent overgrown area. 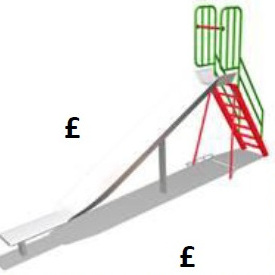 Friends of Troopers Hill are seeking funding to replace the red slide that had to be removed from Troopers Hill Field after more than 40 years due to rust.

There is a crowd funder and the group are applying to a landfill trust for funding, but if this is not successful then some CIL funding may be required.

There is a request for play facilities so that residents can access facilities without crossing a main road.

The discussions on this at the meeting in January 2021 highlighted the lack of facilities in this area, and also that improvements are needed to Rodney Road to improve safety for all road users.

Plans for improvements to make the Beehive Centre more visible and accessible from the from St George Park were presented to the meeting in January 2020. 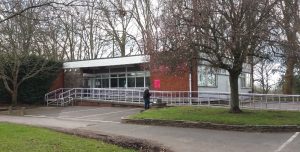 The threat of closure of the library has now been removed with the Council confirming that all libraries will stay open, but there are options to modernise the library and make better use of the space.

The current building was opened in November 1963, over the years there have been a number of suggestions that better use could be made of the site. In the Area Green Space Plan produced in 2009, the library and part of the park adjacent to it were shown as ‘area of possible multi-purpose building including library’. 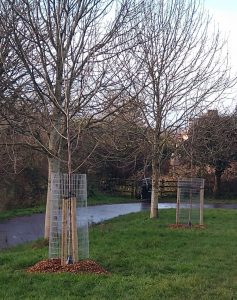 Some CIL money is reserved for tree planting and some of this was approved for spending in the winter of 2020/21, so some new trees are currently being planted around the area.

There are more funds available for tree planting in winter 2021/22.

Schemes to Improve Walking and Cycling

These are schemes funded at least in part by Government funding to improve walking and cycling across the City. More details on the Council’s website

The consultation asks for your suggestions on how to make walking and cycling easier and how to improve the general street environment.

It also asks for views on specific proposals to allow the use of Beaufort Rd as a through route by motor vehicles in eastbound only (Blackswarth Road towards The Avenue). Cyclists will be able to use the road in both directions. 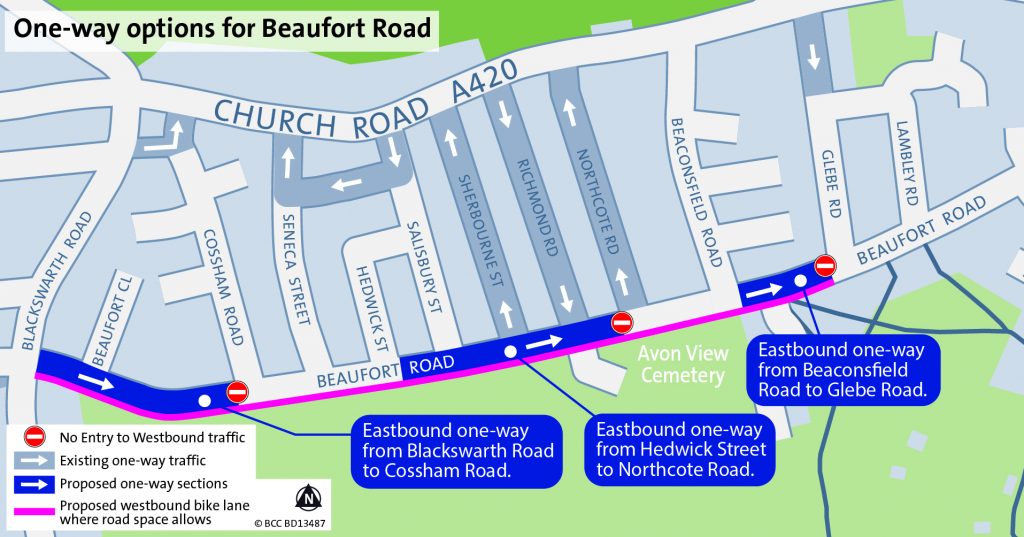 A St George Neighbourhood Partnership meeting in December 2013 decided to proceed with a similar scheme on Beaufort Road, but funding and other issues mean it didn’t happen at that time.

This scheme was allocated funding in 2019 (see below for more details).

Other highways projects that have been suggested in St George over the last few years can be seen via the interactive map on the Council’s website – and you can also add your own ideas.

At the formal Area Committee on 3rd October 2019, it was agreed that the following projects would be funded (CIL funding unless noted):

There are more details & updates on some of these projects below 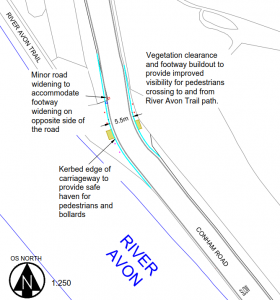 This is where pedestrians using the River Avon Trail have to cross the road and it is particularly dangerous for people walking from Conham.

There have been a number of proposals to improve this crossing over the years, some as part of schemes to include an improved cycle route but none have progressed.

The proposed works include additional footway on the woodland side so that people crossing can see round the bend.

This is a scaled down version of the application that was approved in January 2017. With planning permission in place more detailed drawings can be prepared and and the work put out to tender, it is hoped that work will be able to start on site later in 2021 or early 2022.

Friends of St George Park have long had an aspiration to improve the lake for wildlife. They are currently carrying out a study into the options for this that is Lottery funded. In addition part of the lake wall has collapsed and needs expensive repairs, this has led to part of the path around the lake being fenced off.

Ideas developed by the Wildlife & Wetlands Trust for Friends of St George Park can be seen below. These are provisional plans and a more detailed report is now being produced. Any project would need to consider the long-term maintenance of both the structures and the wildlife areas. 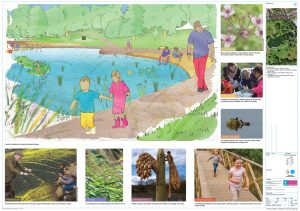 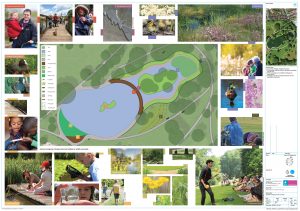 Improvement works to the building and grounds of St George Community Centre carried out in 2020 include:

Planning permission for a new arch at the entrance from the park has now been granted. 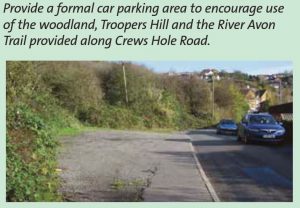 The creation of a formal surfaced car park area on the current area of rough ground could reduce flytipping by making the area look more attractive.

It would give alternative car parking spaces for visitors to Troopers Hill (using the adjacent steps and footpath) and for people wanting to use the River Avon Trail.

It is hoped that this project will be progressed later in 2021.

CIL allocated in 2018 was used to provide new permanent public toilets in St George Park which opened in 2019.The café kiosk was also refurbished as part of the same project.

Funding for maintenance (cleaning etc) will come from the Parks budget but some of this will be covered by increased takings from the café kiosk – which is also to be refurbished.

This followed the closure of the old  public toilet block at the main entrance in January 2018. A temporary toilet block was provided for the summer 2018 and again prior to the opening of the new toilets in 2019. 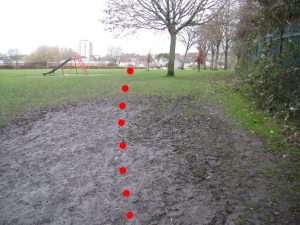 Troopers Hill Field between the play area built-in 2016 and Troopers Hill itself can be very muddy in wet weather. Friends of Troopers Hill raised funds to build a new linking path around the Field as part of their Ways to Nature Project.

The CIL funding allocated to this project was used by Friends of Troopers Hill as match funding to apply for grants to fund the rest of the cost of the paths. This funding was secured from from both Enovert Community Trust (ECT) and Ibstock Enovert Trust (IET)